Tira Peatbog (Lat. Tiras Purvs) lies in Liepaja region, south-western part of Latvia. There, on 26 May 1936, workers found a treasure, a part of which was given to the History Museum. The archaeologist P. Stepiņš went to the location to check the circumstances of the excavation and found several more artefacts.
The area of Tira Peatbog is about 700x1000 m. The treasure was found in the middle of the peatbog, between the upper — light brown (110 cm) — and lower — black (45 cm) — layers of peat. The majority of the finds were found in the lower layer with solid white sand below.
The treasure included: a bronze brooch; a bracelet, spirals; an iron ring; bindings; a bronze chisel with a decorated wooden handle; a drinking horn; various wooden buttons / clasps; a ball of woollen yarn; a number of woollen items — a huge woollen blanket (cloak), woollen hood (or bag); puttees (about 3 m long), footwear / felt boots?; oaken handle; ashen sticks; leather pouch with a horse hair string; leather straps; two round spruce shields, etc. According to a witness of that time, the fabric looked the same as that used by the people, who found the treasure. They even thought that the find wasn't that old and attempted to check the strength of the fabric, thus ruining quite a lot of the finds.
In order to keep wooden things and fabrics from floating to the surface of the bog, the treasure was held in place by a long thin log and pine stakes with burned ends, hammered around the treasure.
The Treasure of Tira was widely covered by press, including archaeological magazines and literature. Nevertheless, the list of the finds is incomplete, while publications contain several inaccuracies.
The treasure was buried approximately in the mid. 9th c. The date was determined based on the typological analysis of some of the items: a bronze brooch with spiral terminals, a bracelet with broadened terminals, spirals, double bindings with riveted ends and clasps. All items and their ornaments are analogous to those found in the surrounding areas dating back to the same period.
The Treasure of Tira was found in the Curonian territory. The surrounding area is rich with a number of Curonian sites — burial grounds and settlements — from various periods, dating back to the first millennium BCE (Impiltė, Apuolė).
The analysis of the items shows that they belonged to a rich Curonian warrior. The treasure was buried during winter as a tribute to the gods for success in battle or, less likely, an offering in order to avoid death or misfortune. Similar treasures were known in other locations as well. They were mentioned in the ancient records and folklore.
Archaeological finds, medieval records and chronicles speak of battles against Scandinavian colonists, which took place in the mid. 9th c. and resulted in them being driven out from the Curonian territory, as well as frequent clashes with other Baltic tribes. Perhaps this treasure is also related to these events. 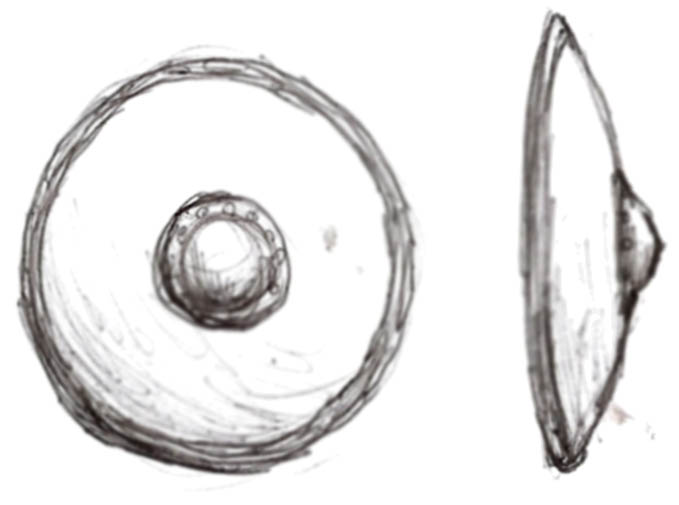 The two round shields made of spruce planks are especially interesting. The first one is flat, about 85.5 cm in diameter with a leather front. It was made of six 0.6 cm planks. The front side between the planks and leather was stuffed with grass, likely for shock-absorbing purposes. The shield had a wooden 13.1 x 10.5 cm umbo, made of a birch knot, which covered an 11.5 cm opening in the centre of the shield. The inside of the umbo was carved to be comfortably held in hand and had 14 eyelets for fastening. Unfortunately, it remains unknown how it was fastened (nails, hemp/flaxen rope or leather strap). The leather on the front of the shield shows marks of beating, which suggests that the shield was used in combat. The edge of the shield features a row of eyelets, most likely for fastening the leather to the edge of the shield. The vertical row of eyelets across the shield suggests of a handle, attached using a rope made of organic material (most likely flaxen or hemp). No iron items that could have belonged to the shield were found. The current condition of the shield is shabby with decayed leather, hay and poorly-preserved umbo. Based on other finds (a drinking horn and a clasp... not really reliable for dating), the shield dates back to the 9th c. The second shield was 73 cm in diameter with curved planks, which suggest that it was a convex shield. What survived to this day is a 68 cm x 11.8 cm x 1.4 cm plank. The centre of the plank features a rectangular opening, which suggests that it might have been the centre of the shield. 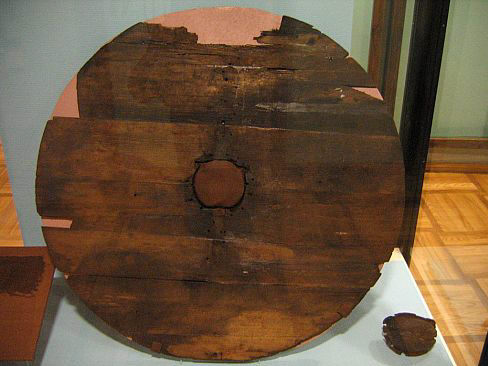 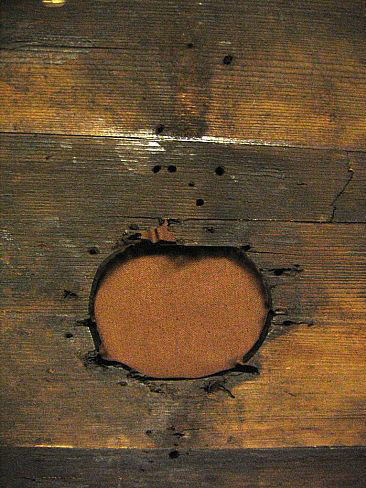 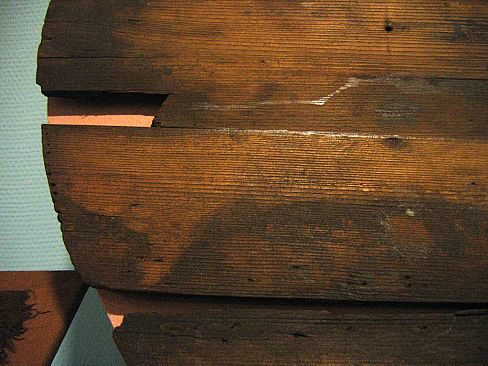 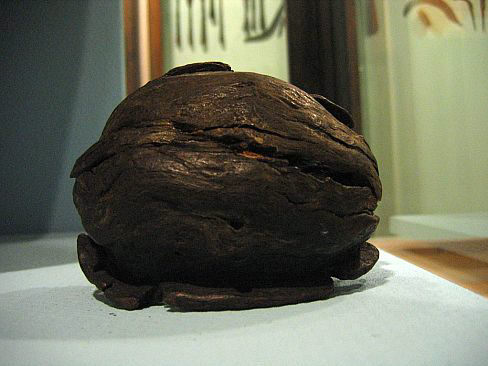 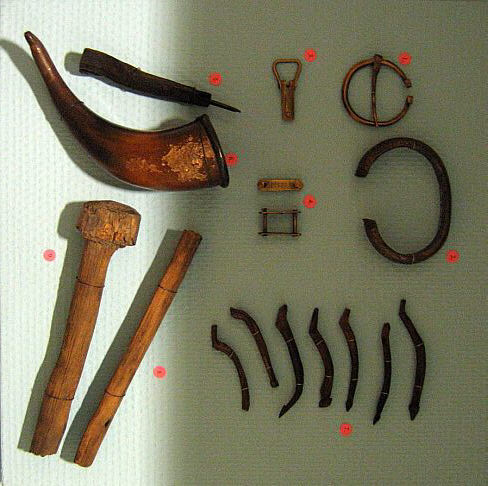