Every troop needs a gambeson, possibly even more than he needs armour. If during the Viking times fighting without a gambeson could be managed, during the XII or XIII centuries fighting without it would prove to be complicated. In most cases gambeson would be the main means of protections and for a majority of troops it would be a luxury they could not afford.
There is a variety of ways to making a gambeson and I will be presenting one of the possibilities in this article, specifically the gambeson. This is not the only way to make a gambeson, but this is the technique I used and I will give a step by step tutorial to this approach.
What are the benefits of gambeson? It is significantly cheaper (nowadays, at least) to make a gambeson than to sew together several layers of linen material and it is less controversial than the variant made out of rope.
So, what do we need? There are two main things: the fabric and the stuffing. I chose a thick linen material because wool does not air well and as a result a gambeson soaked in sweat would take a long time to dry. And I did not find canvas that would be thick enough. It is important to choose a material that is thick enough because wool is prone to penetrate the surface material and that is neither pleasant, nor decorative. I believe it is clear where to find suitable material: young ladies’ dowry trunks and grandma's attic are suitable places. In the worst case scenario you can go to a shop that specialises in materials, same way I did.
The second material is the stuffing. Usually natural wool is used (or at least should be used). All you need to do to acquire it is to find a sheep that is willing to share its fur. If you are struggling to find or to persuade a sheep, I would suggest contacting a farmer - they have got some tricks up their sleeve to do that.
Freshly harvested wool is suitable for stuffing. An advantage of woollen stuffing is that your gambeson will never absorb the smell of sweat. The reason to that is simple - the smell of sheep tallow and the barn will stay forever. If, however, you are not afraid of the possible smell of sweat you can wash the wool, but be cautious and do not do it in high temperature, or you will end up like me - the woollen locks will rough up into various sized balls of felt that will never spread out evenly in the gambeson and will render it rather lumpy. Then you will have to take the woollen balls apart by hand and make it smooth and even again. Believe me, it is a really frustrating task. 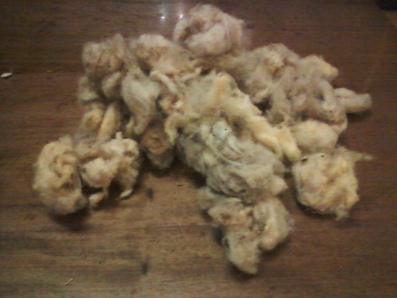 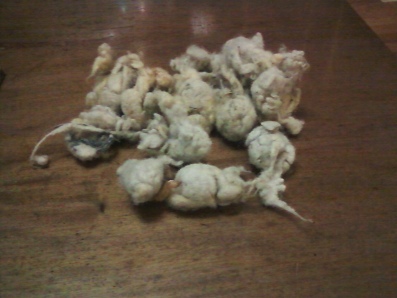 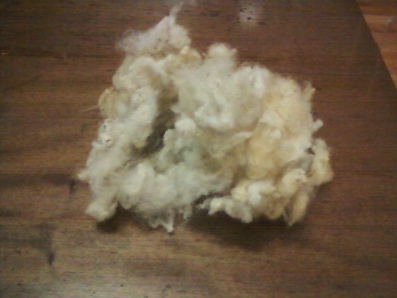 After we have prepared the wool, we can cut the material and sew the gambeson.
First, we need a scheme for the gambeson. In this case I have chosen a non-standard variant (who can confirm what was the standard nearly a thousand years ago?) that is buttoned up on the chest, rather than pulled-on. This is done because it is far more comfortable to put it on and to take it off, especially after a fight when sweat sticks the material to skin. So we did a scheme that looked roughly like this and marked the seams in advance. 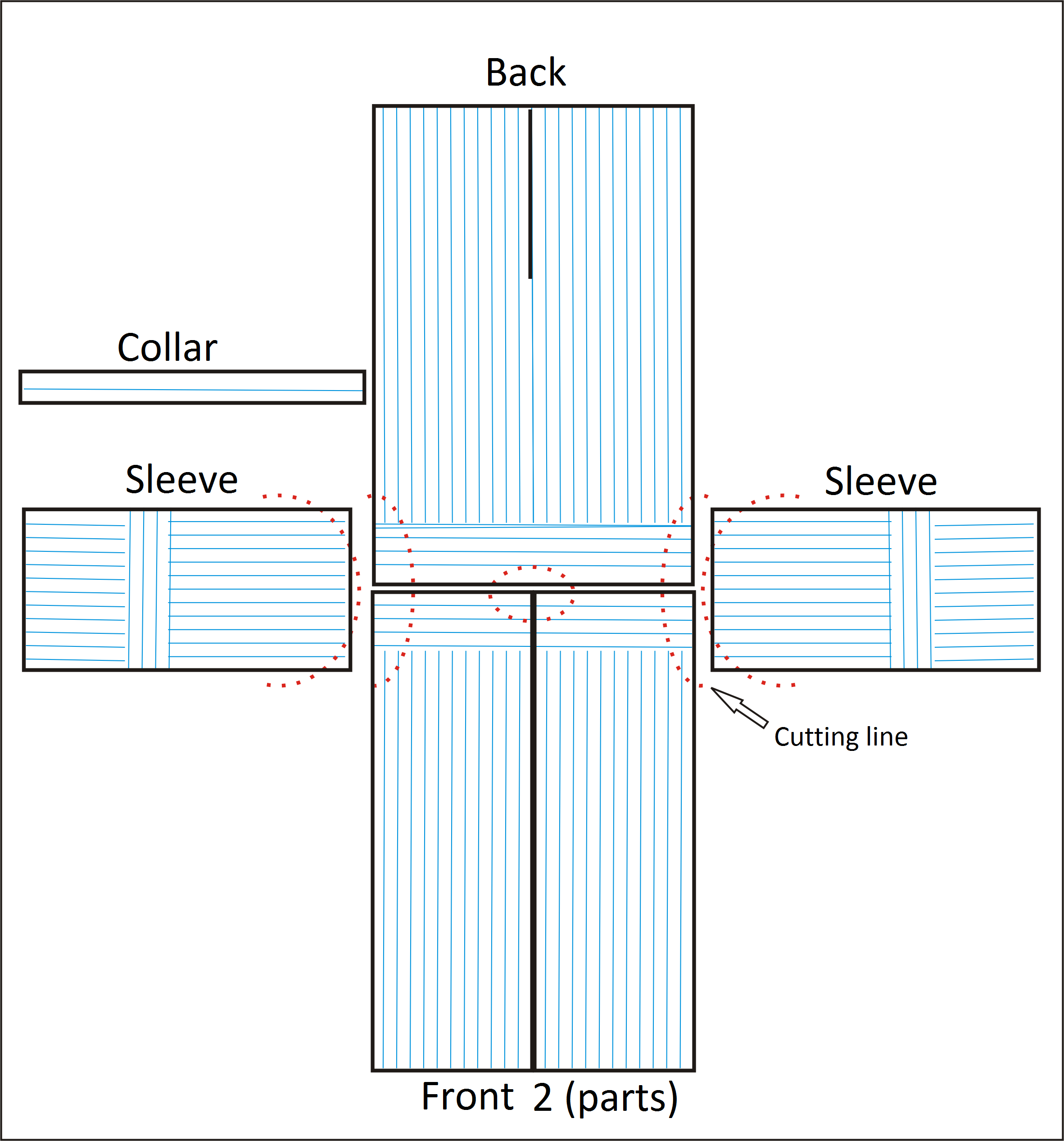 Put the exact scheme on the material and cut the parts.
IMPORTANT: Don't forget that the parts shrink as they are stuffed; in a ratio of 3:2 and as a result a part that was 60cm without the stuffing will become 40cm long after the stuffing. That's why when measuring and counting add half the length of the desirable length to the raw material.
After cropping the parts we put them together and stitch (I believe you understood that each piece has two layers). Then we take a board and a piece of soap and mark the lines where the seams should be. The seams should be done every 4 cm, even better if they are done every 3 cm. If the seams are too far apart then the gambeson does not look good and it requires a lot of wool to stuff, making it heavier and more expensive. After that follows the most boring and most time consuming task – the sewing. If you have a loving wife who is willing to do the sewing – you are lucky. Otherwise, you will have to do the sewing yourself. There are several things to know about the sewing itself. You should only use strong linen thread and I would strongly suggest coating it in beeswax (dragging the thread along a piece of beeswax). The wax gives the thread strength, prevents it from shedding and makes it more resistant to the salts found in sweat. You should use a simple, yet a strong stitch, this would do just fine:

After you had done the sewing, you can start stuffing. Take a tiny amount of wool and stuff it into a "tunnel" of fabric using a stick. Don't stuff the wool too tight and if you get a lump just rub the wool between your palms. Don't overdo one "tunnel", if you make a "sausage" that is longer than the surrounding "tunnels" it becomes really uncomfortable to stuff. To avoid that, stuff along the length of the detail and once you have stuffed all "tunnels" to even height, start the process again. 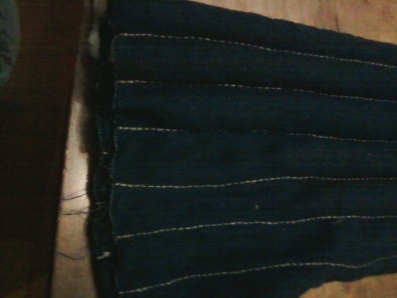 After you have stuffed all the details, arrange them into a shape of a garment and your gambeson is complete. You might have to crop out a piece of material from the armpits to make some space or do some other adjustments to make gambeson comfortable to wear.
After the gambeson is arranged and sewn together use a piece of fabric or leather to finish up the edges of the sleeves and other details. It does not only prevent the gambeson from disintegration, but serves a decorative purpose as well. 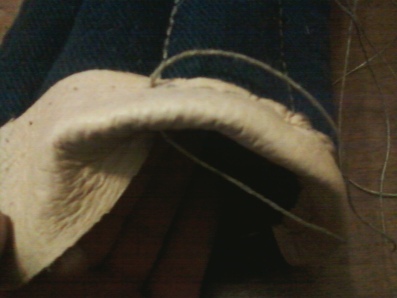 In this case I chose to finish up the armpits with fabric and every other detail with leather. I used horns for buttons, which I have drilled through and pierced with a string of leather and created loops for buttons using the same leather. 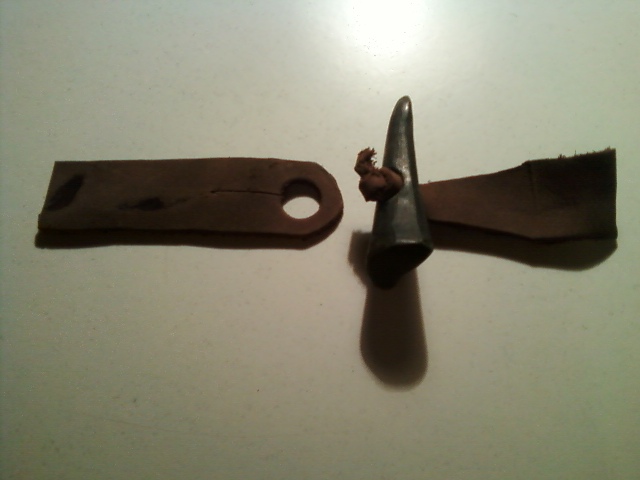 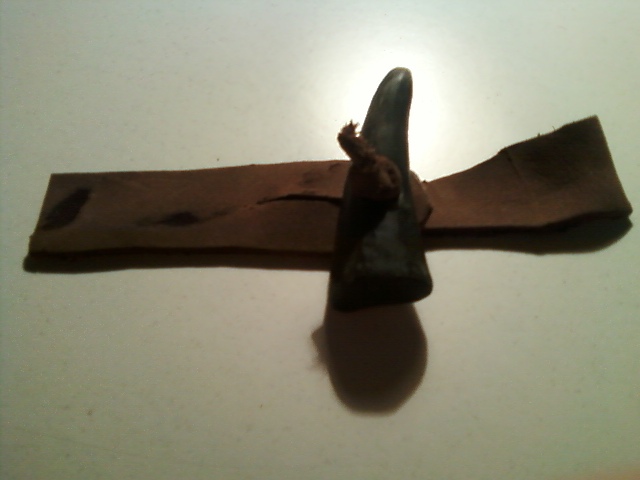 If you had followed the instructions correctly, you should see something like this: 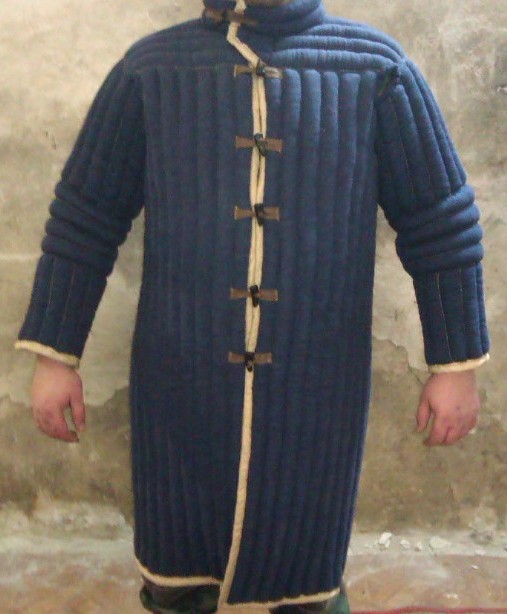 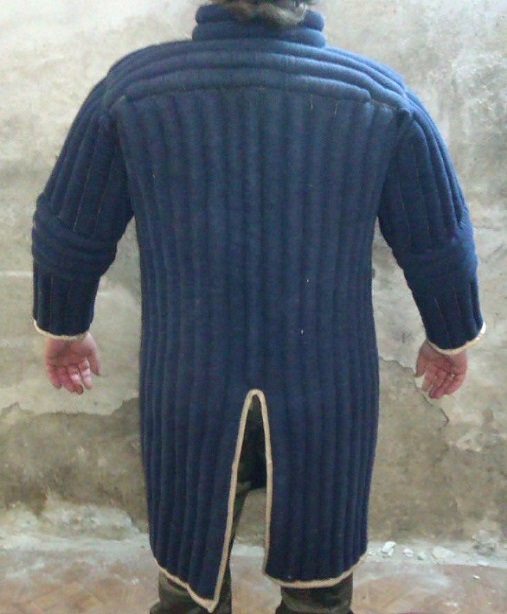