Why do we need tar? The answer is simple: we need it for EVERYTHING. Tar can be used practically everywhere:
Application in domestic use. Tar was used to lubricate the wheels of wooden carts and to coat boats made out of tree trunk (other things constantly held in water were also coated with tar), even shoes where cleaned with tar. Boat ropes were also protected from salty water with the help of tar.
Application in medicine. In the old times (and sometimes even nowadays) tar was used to cure parasitic worms and cure various animal illnesses. In the spring time tar would be given to animals that were let outside for the first time to increase immunity. Horse hooves would be covered in tar to prevent rotting and their tongues would also be treated with tar to prevent infectious diseases. Tar would also be used in soap to cure skin diseases.
Food. In tiny amounts tar is still being used as a spice in certain kind of candy and alcoholic beverages.
Decoration. Pour some tar over a (non)friend before rolling them in feathers – it turns out to be a rather festive costume. Usually, the (non)friend would never need another costume ever again. Tar would also be used to smear on the doors of promiscuous girls.
The lovers of historical reenactment use tar as natural glue when making arrows, spears, javelins and so on. I have personally used it to glue a horn handle to a knife (and a bunch of javelins). The knife has been holding up for several years without any problem. 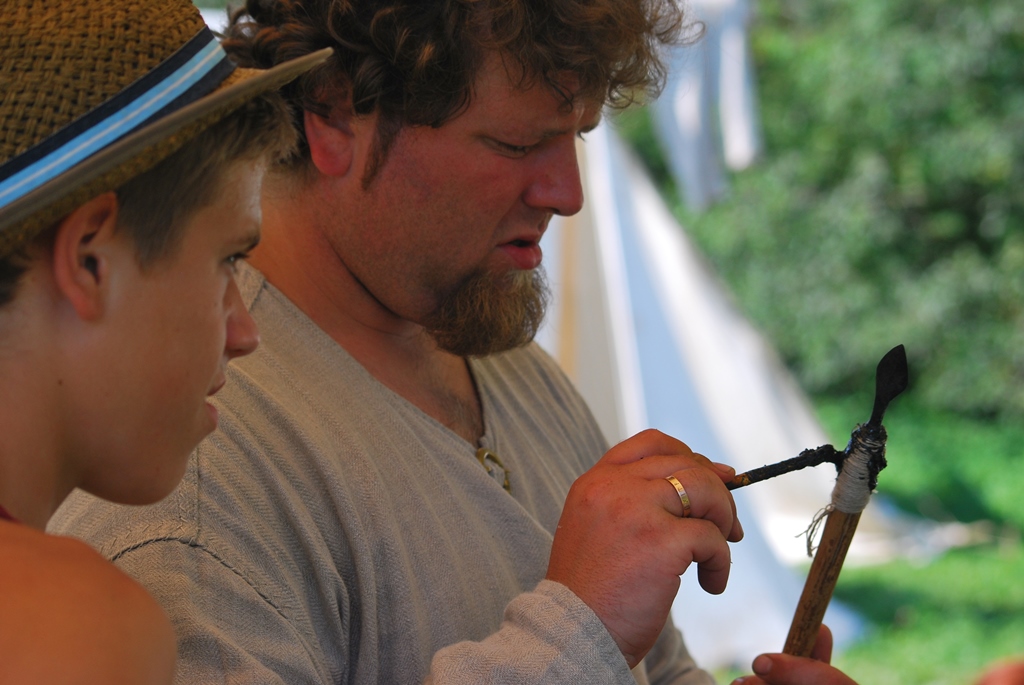 In this article I will describe the making of tar step by step.
Firstly, to make tar, you will need some birch bark (that white layer, which makes it easy to start a fire or light a furnace). We need a significant amount of birch bark, so where do we get it? The answer is simple: peel it from a tree. But whatever you do, don’t peel it of a living birch. The season of deforestation is during autumn and winter, so you can always make a deal with the lumberjacks for some birch bark from cut down trees (peeling off the bark does not damage the wood). There is an easier way, too: because we don’t need large pieces of bark to make tar, as we need for making boxes or covering roofs, bark taken from fire wood will do just fine. Besides, it is easier to peel bark from smaller pieces of wood and you can collect small pieces of fallen bark in your wood shed.
So, we have our birch bark. Now we need good weather (we will be spending half a day outside) and a place to make a fire. This summer I have found a perfect location in a crafts camp organised by my friends...
Since we have everything we need, this is what we do: 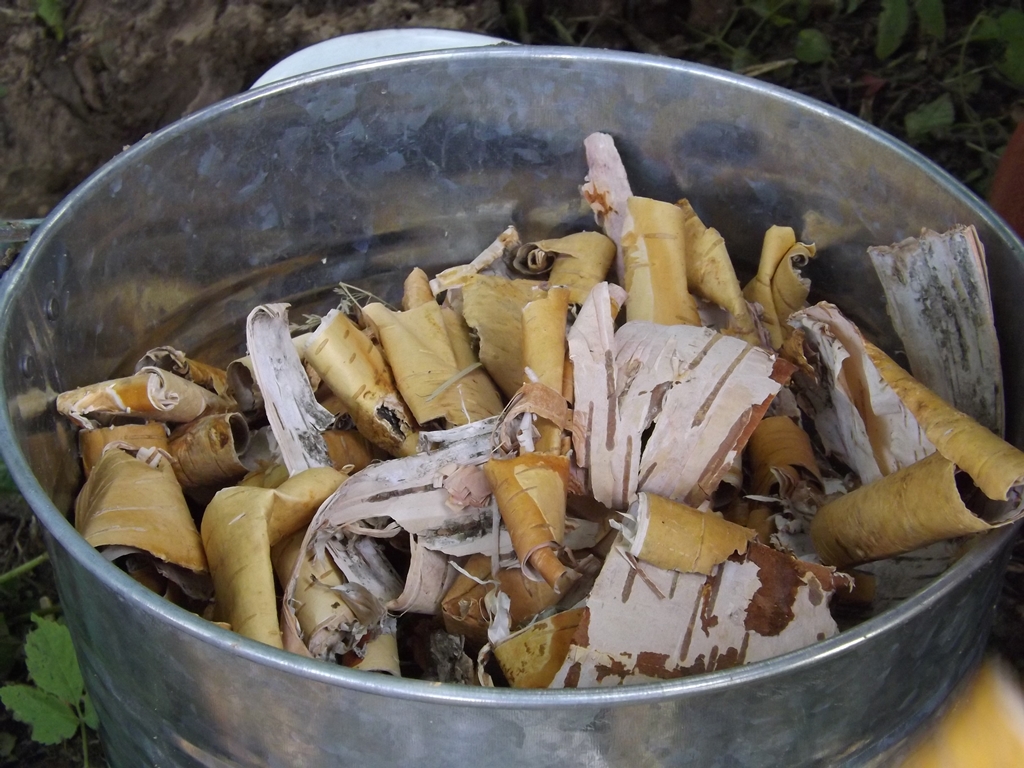 1. Let’s put the bark in a metal bucket or a tin tank (it has to be able to contain liquid): We put as much birch bark as we manage. 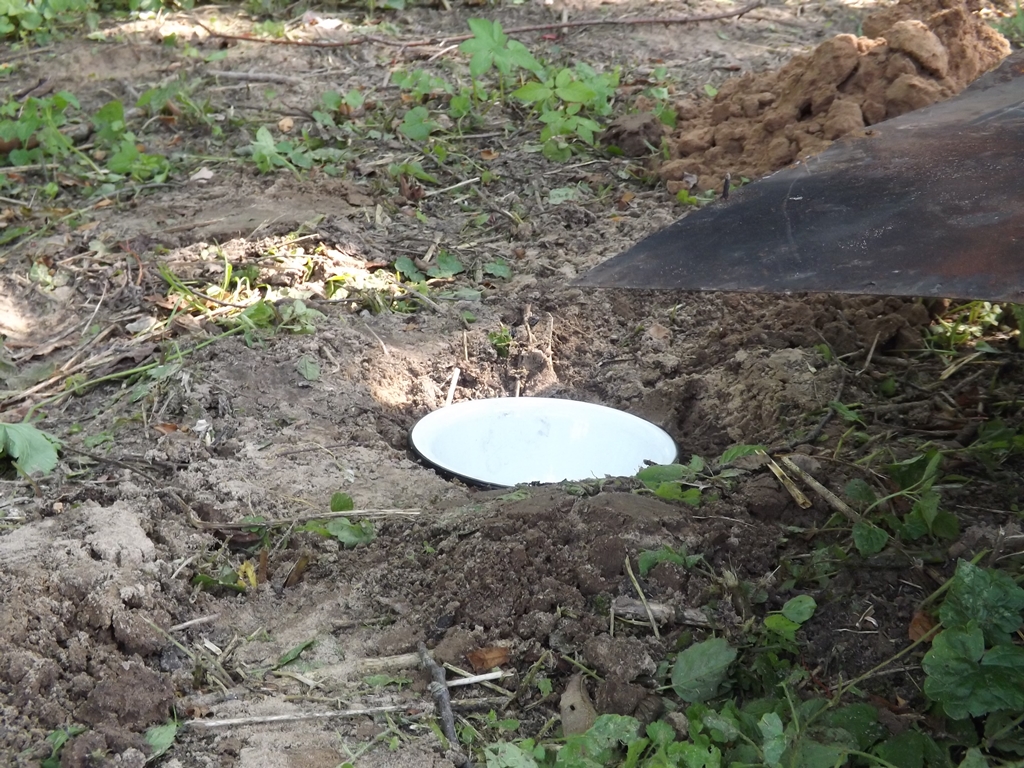 2. Dig a hole in a ground and put a heat resistant vessel to collect the tar. 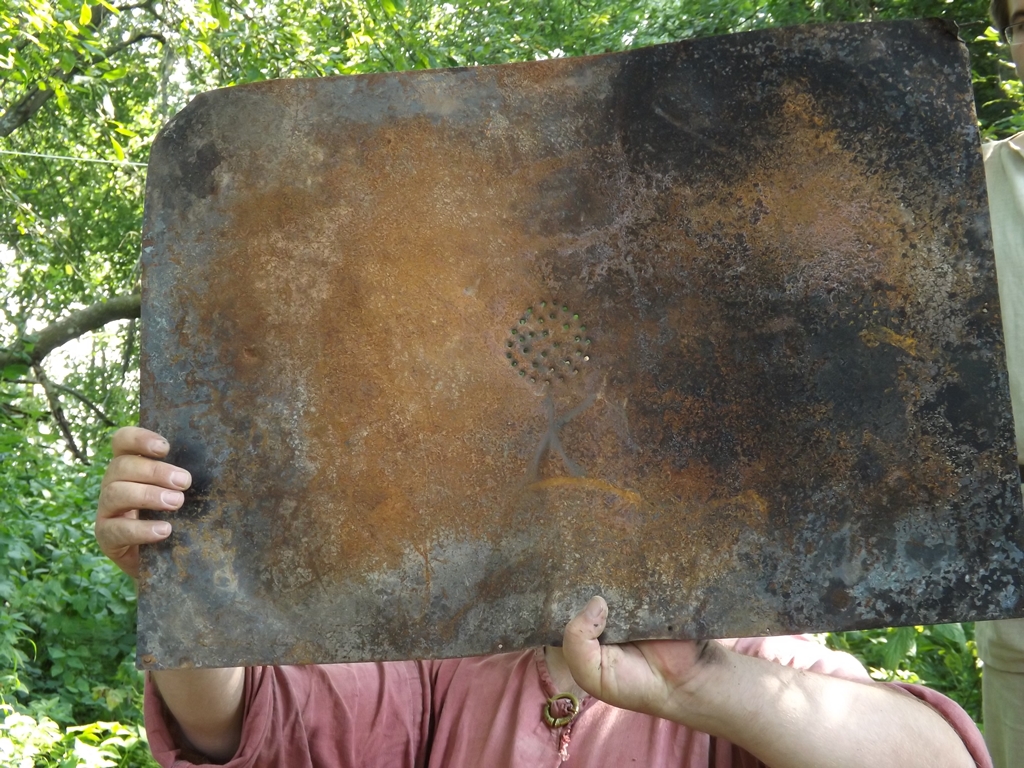 3. Cover the vessel with a sheet of tin that has holes in it. The holes need to be above the vessel, the tin sheet need to be large enough to cover the bucket with birch bark. 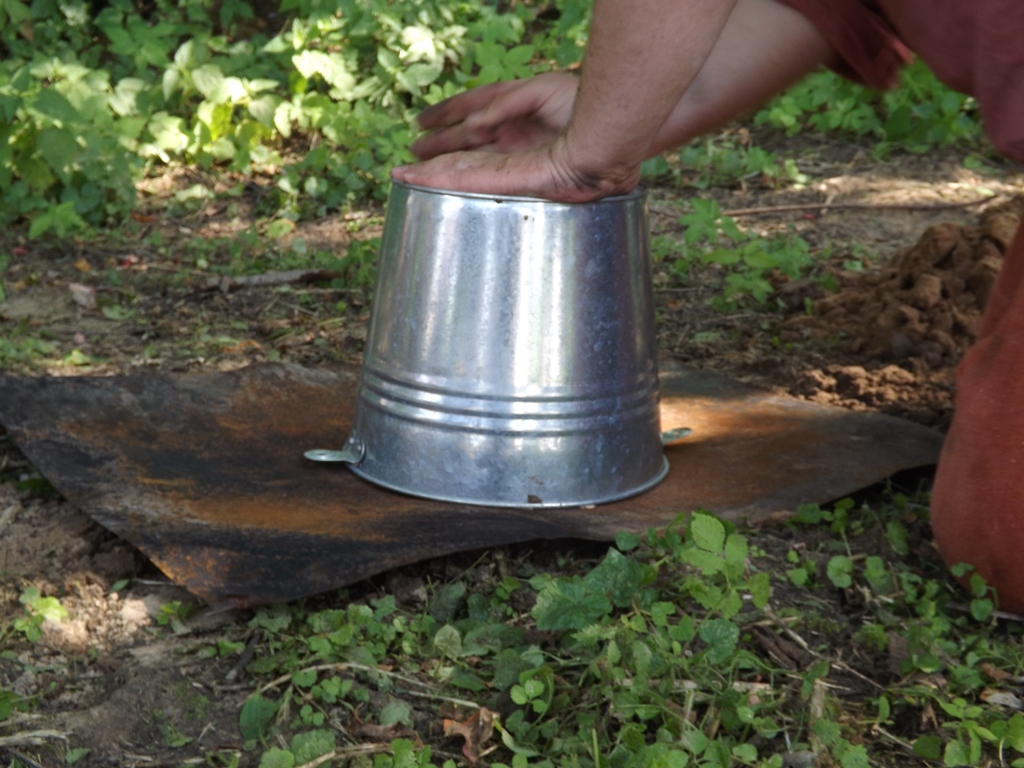 4. Place the bucket with bark on the sheet of tin and the vessel in the ground... 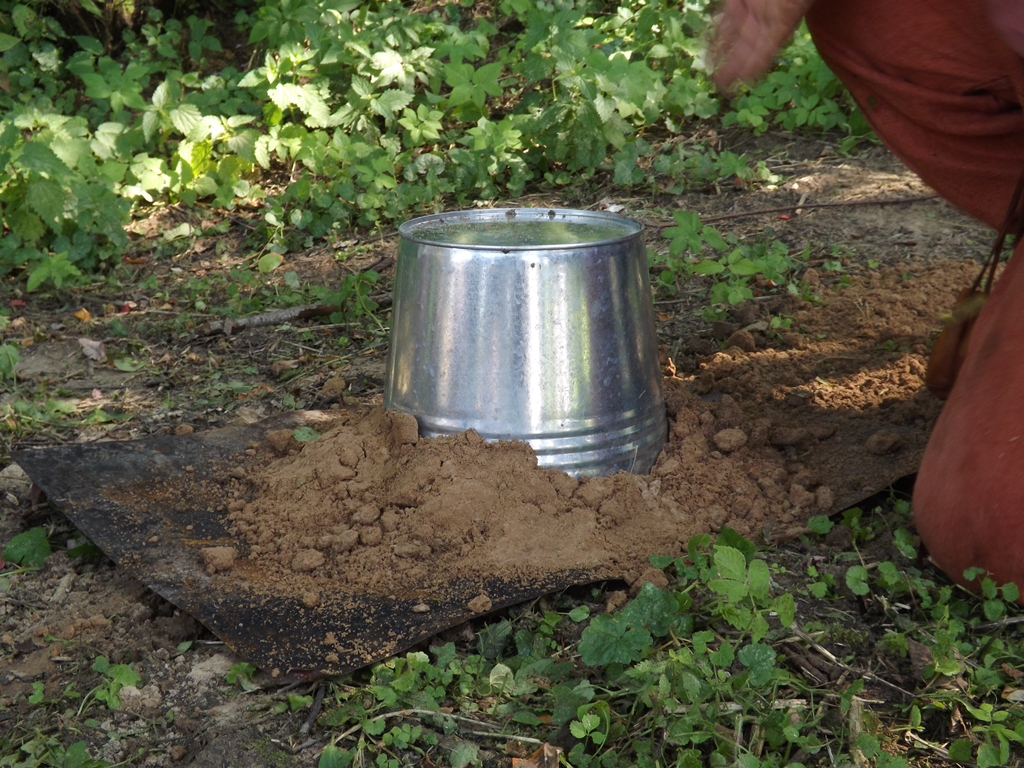 ...and cover the whole thing with dirt, so that it is air-tight. 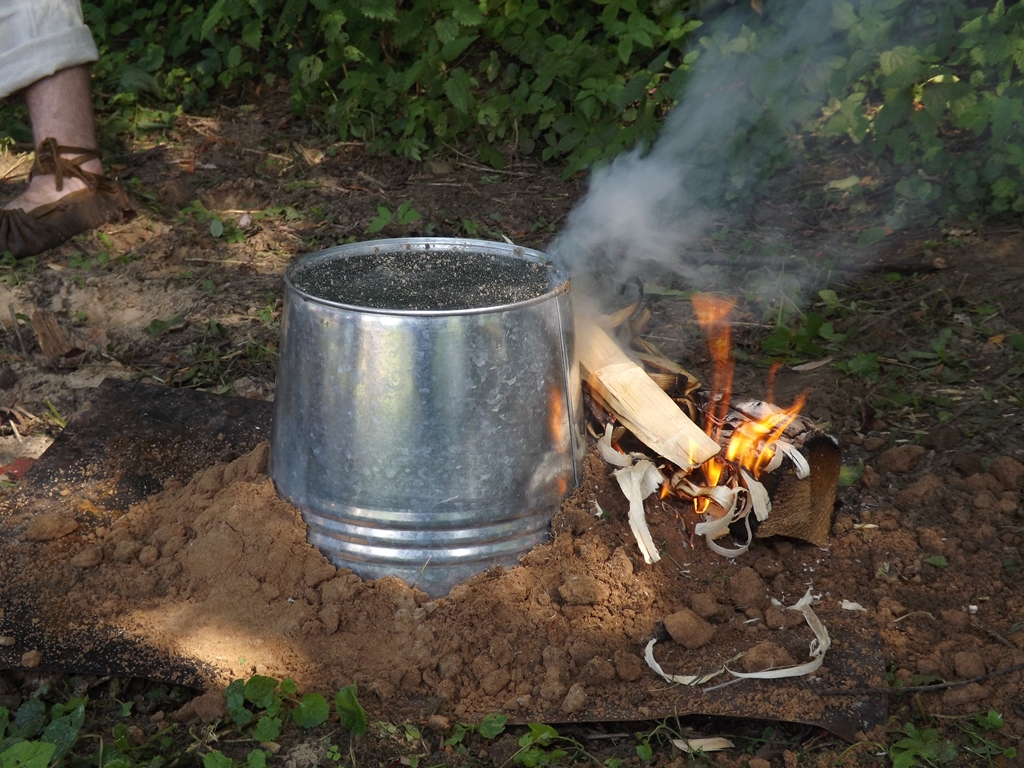 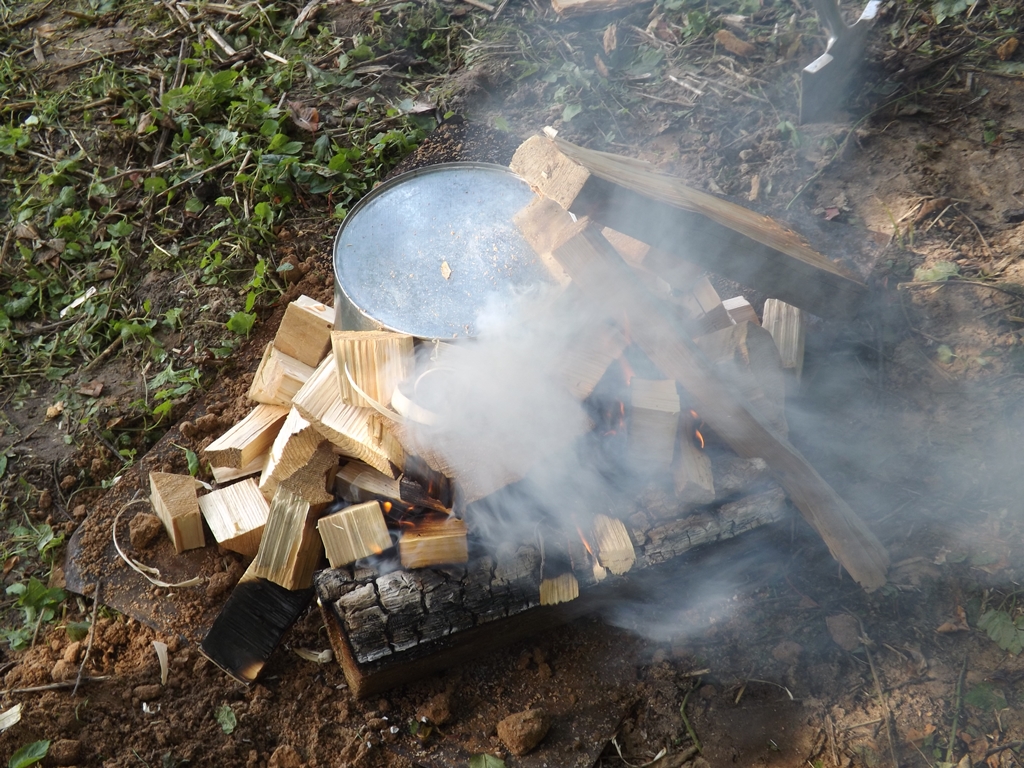 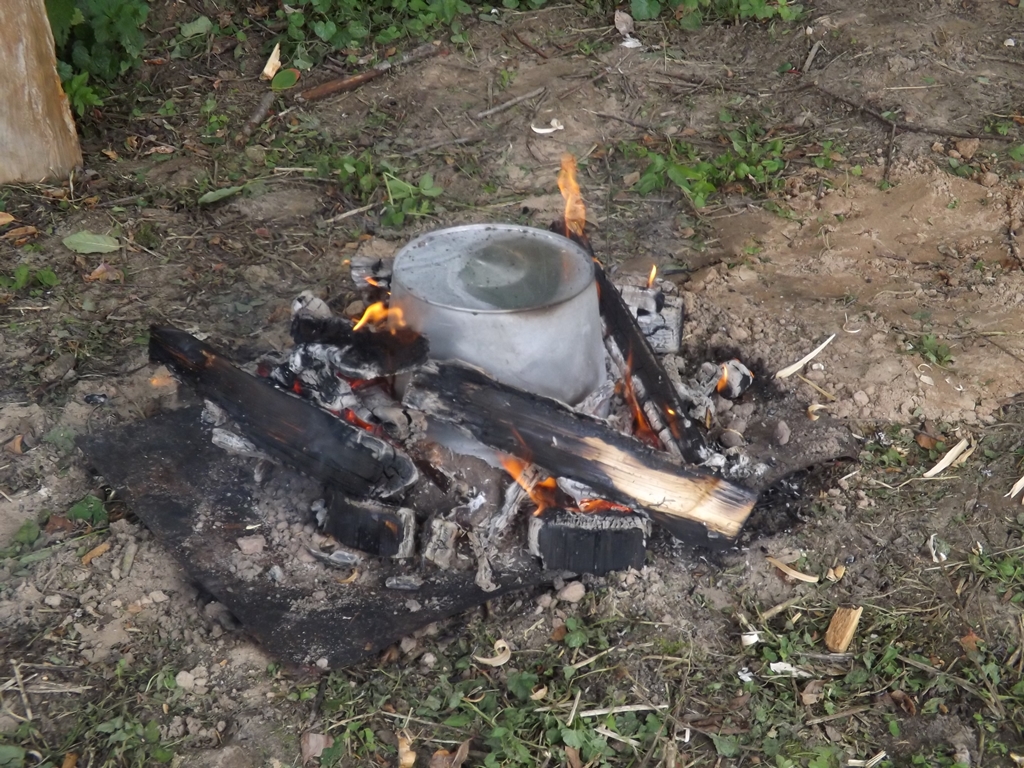 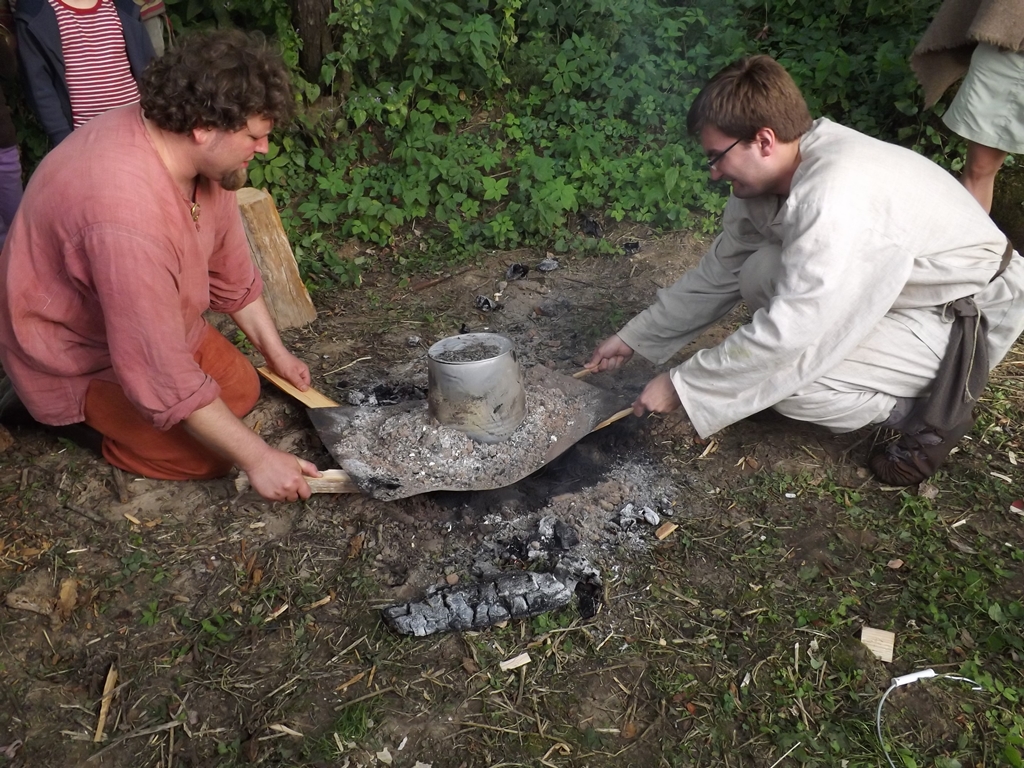 6. As the fire dies out, carefully remove the tin (together with the bucked and the remains of the fire). 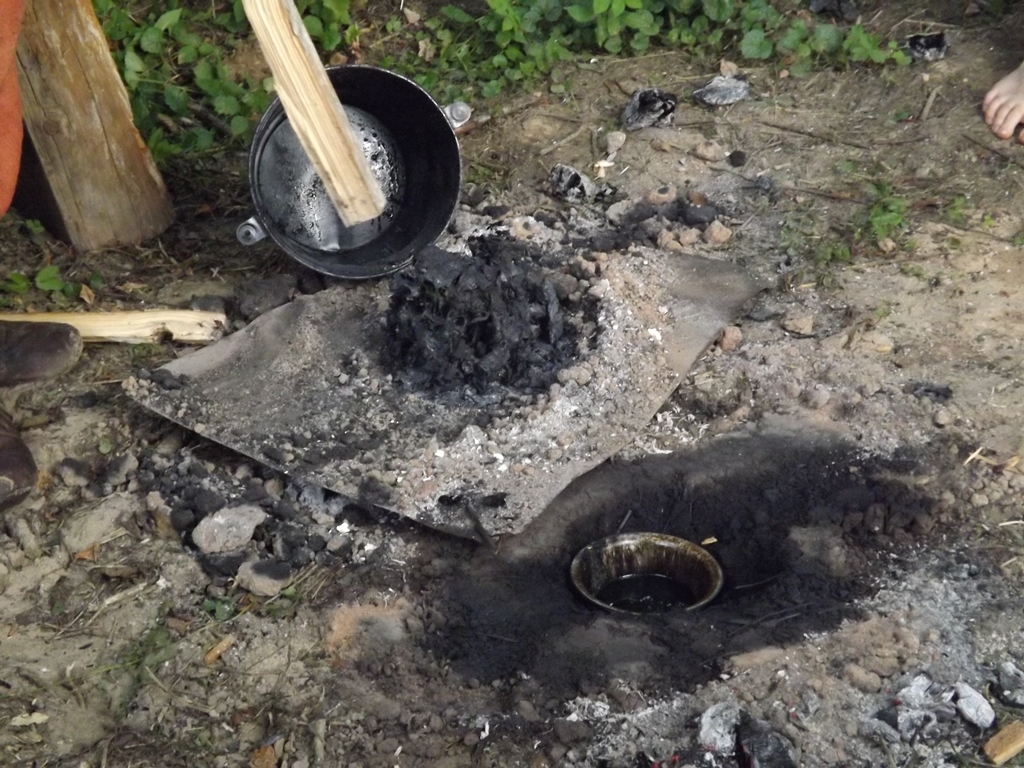 There will be some tar inside the vessel.

During this making of tar we got half a glass of tar from 10 litres of birch bark. Because we ran the fire for quite a long time and the weather was especially hot and dry, we got a small amount of tar, but it was good and dense: 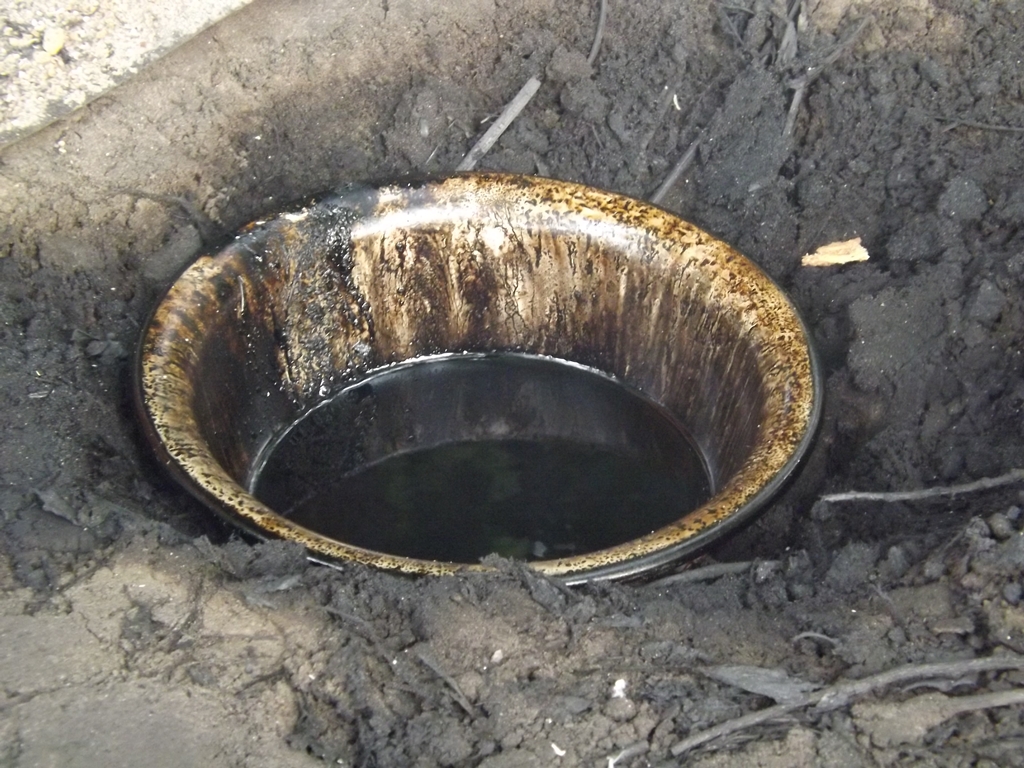 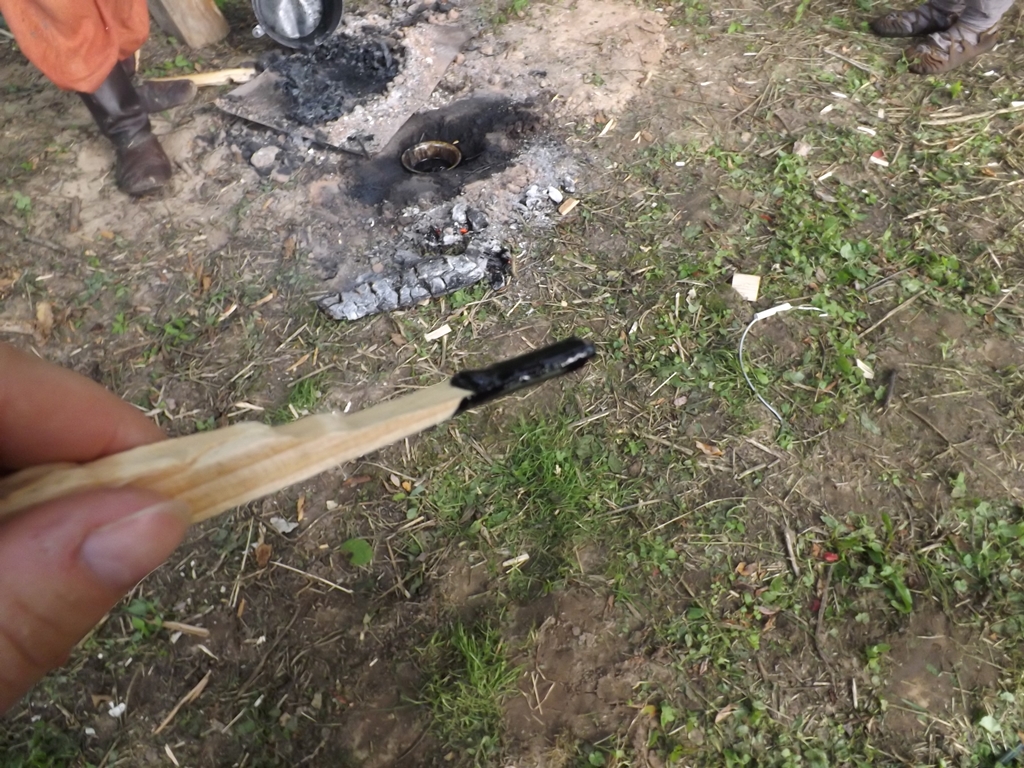 Usually, the tar is not as dense. That is not a problem – sometimes we need tar of lower viscosity and if you need more dense tar, all you need to do it to heat it up – water inside the tar evaporates leaving dense tar.
All you need to do now is to try and make your own tarn and use it according to your needs!